Revision as of 21:01, 7 March 2013 by Nomis52 (talk | contribs) (Created page with "300px|right Since March 2013, OLA contains an SPI plugin, which allows you to drive strings of LEDs pixels provided your hardware has an SPI device. U…")
(diff) ← Older revision | Latest revision (diff) | Newer revision → (diff)
Jump to: navigation, search 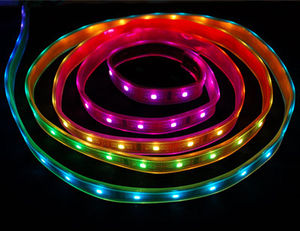 Since March 2013, OLA contains an SPI plugin, which allows you to drive strings of LEDs pixels provided your hardware has an SPI device. Using embedded Linux platforms like the Raspberry Pi, this allows one to build Pixel strings controlable via any of the supported protocols (ArtNet, E1.31, OSC & more) for < $100.

Alternatively if you don't want network control, you can send DMX512 to the LEDs using the Python, C++ or Java client library.

On the host side, any SPI hardware supported by the kernel should work correctly. By default OLA looks for devices in the form /dev/spi* .

On the LED pixel side the following is supported:

Once you have OLA running it's a matter of patching an SPI Output port to a universe and then patching the desired input port.