Warning: This documentation may be out of date. If in doubt check the code in the Doxygen documentation or the ola-examples package.

OLA provides a C++ client library which allows other applications to send/receive DMX as well as control the OLA server. When writing a client application, you have a choice between two client APIs. There was a third API, the OlaClient, but that was deprecated in Feb 2013. It will be removed in a future release and should not be used in new code.

To correctly build and link against libola you'll need to pass the right options to your build system. OLA installs a pkg-config file with the right flags. To get the flags run:

If you're using autotools, you can add

If you want to:

Only send DMX
Use StreamingClient.h . This sets up a unidirectional channel between the client and the OLA server.

OlaClient - DEPRECATED, DO NOT USE 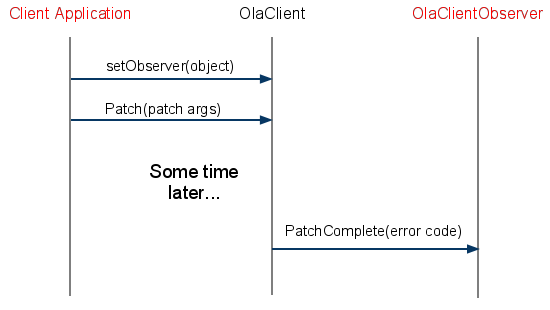 On the other hand, the OlaCallbackClient takes a Callback object whenever a method is called.

The constructors of both OlaClient and OlaCallbackClient take a pointer to a Connected Socket object. While this is useful for testing, most clients don't care about the details of creating a socket, connecting to the OLA server etc. This is where the client wrapper classes come in. They take care of setting up the connection to the server and provide a way to access the OlaClient* object and the underlying SelectServer object.

Note that for historical reasons, the OlaClientWrapper class is also referred to as SimpleClient.

Example I: Sending an DMX update using the StreamingClient

Note there isn't any need to poll for updates from the server in this case because the communication is all one way (client -> server). This also means that you can't receive DMX data or modify state on the server (like port patching and device parameters) when using the StreamingClient.

Also take note of the call to usleep(). Without this you're likely to fill the network socket buffer at which point the client code will detect an error and close the socket (you may need to increase the number of loop iterations to trigger this).

This example connects to the OLA Server and sends one DMX update just like the example above but instead uses OlaClient & OlaClientWrapper. It's about as basic as you can get because it requires no callbacks and exits immediately.

The previous example only sent a single DMX update before exiting. This next example adds a timeout which sends DMX every 50ms. This introduces a new class SelectServer which is used for registering timeouts.

In this example we create DmxTimeout class whose SendDmx() method is called every time the timer expires.

The other important part here is the SelectServer. As well as the RegisterRepeatingTimeout method we've used above, this can also be used to register sockets so we can respond to network activity. The Run() method starts the main event processing loop which will halt if an error occurs or Terminate() is called.

The forth example shows how to listen and respond to event from the OLA server.

The above is all well and good but what if the main application has it's own event processing loop? An example of this is a GTK/Glib application which uses GMainLoop.

On the other hand, what if you're not connecting to the LLA Server over TCP? Sometimes it may be desirable to embed the LLA server within the main application.

Bypassing the SimpleClient and using OlaClient directly addresses both these problems.

This example shows how we can create our own instance of a ConnectedSocket (PipeSocket is a subclass of ConnectedSocket) and pass it to the OlaClient to use. This code is very similar to what SimpleClient does under the hood.